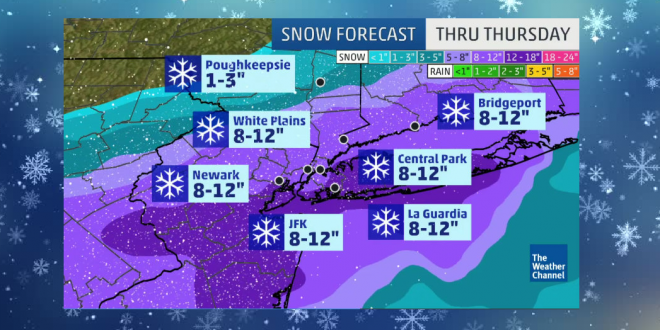 The fourth New York City nor’easter of the month arrived Wednesday, bringing the familiar litany of woe: Massive airport delays, whipping winds and the threat of up to 15 inches of snow.

The first flakes began falling during the morning rush hour, with the effects felt immediately at La Guardia, Kennedy and Newark Airports — a staggering 3700 flights canceled by 8:30 a.m., according to FlightAware.com.

Officials warned all service at La Guardia was likely to shut down later in the day as the storm worsened, and most flights from all three airports will be impacted as the winds gust to more than 50 mph. “This is a serious storm, not be taken lightly,” said Gov. Cuomo at a morning briefing. “It’s going to get worse. It’s a good day to stay home.”

#Noreaster4 Update: 3,690 flights now cancelled to/from within US. @EWRairport and @LGAairport are most impacted as of now (over 800 cancellations each). Live cancellation/delay info available here: https://t.co/cdxPRg7G48 pic.twitter.com/NrxoYFVhUc

#LGA expects airlines to cancel all flights after Noon today due to the Nor’easter affecting the region. We urge customers to check with their airline to confirm their flight before traveling to LGA. Please contact your carrier for more details on rebooking cancelled flights.

Wednesday, March 21, 6 AM — nearly 600 total flights reported cancelled today at PHL. Some flights are departing and arriving this morning. Deicing operations ongoing. Be sure to check flight status directly with your airline before coming to the airport.

Dulles is accepting planes large and small in the snow ❄❄❄(about 3-4 inches and counting).. and some have canceled. Check with your airline to determine the status of your flight. pic.twitter.com/brshNrgGg1

The snow is beginning to pick up! Delays & cancellations are possible throughout the day & tonight. We encourage everyone to monitor the status of their flight with their airline before coming to the airport. pic.twitter.com/MaS3HrwCie

#EWR is currently reporting 845 cancellations, nearly ¾ of its daily flight operations. Limited flight activity is expected throughout the day. Anyone planning to come to the airport should check with their airline before doing so. pic.twitter.com/wPWlGATlUf

SERVICE ALERT: Due to impending severe weather in the Northeast region, we will be operating modified service on Wed. 3/21. Full service will be restored when weather conditions allow us to safely do so. Service and re-accommodation details are outlined below. pic.twitter.com/RncTFtry7O

03/21: Federal offices in the DC area are closed. Emergency and telework-ready employees must follow their agency’s policies. https://t.co/7rxtoFn49i