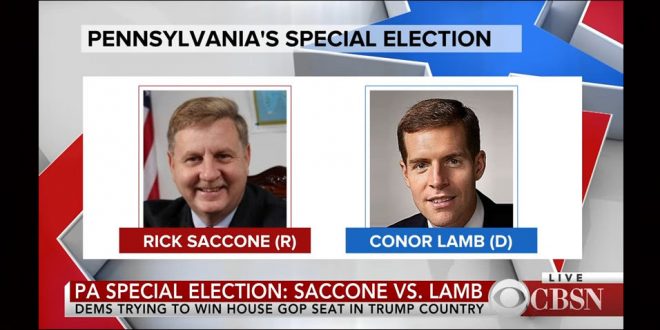 Tuesday’s special election in Pennsylvania’s 18th Congressional District is coming down to the wire, with Republican Rick Saccone and Democrat Conor Lamb battling for a seat deep in Trump Country. President Trump won this Pittsburgh-area district by about 20 points in 2016, but it’s Lamb who has run a high-energy race to challenge Saccone, after Rep. Tim Murphy, R-Pa., resigned last year amid a sex scandal. Republicans have privately grumbled that their candidate has been lackluster, and the Democrat could be poised to pull off the upset. Polls will close at 8 p.m. ET.

Tuesday will likely be the last time you hear about a competitive district in the Pennsylvania 18th, but whoever emerges victorious in the special will likely have to fight hard to keep his seat in the regularly scheduled November 2018 election. How can this be?

Earlier this year, the Pennsylvania Supreme Court struck down the state’s current congressional map as too gerrymandered in favor of the GOP; in February, the court imposed new district lines that are friendlier to Democrats. The new map splits most of the current 18th District between the new heavily Republican 14th District and the swingier, suburban 17th District.

If Saccone wins on Tuesday, he has said that he would seek re-election in the 14th, but if Lamb wins, he is expected to go after the 17th, even though he would have to face incumbent Republican Rep. Keith Rothfus there. Of course, the loser could decide to take a second bite of the apple in either the 14th or the 17th as well. After all these long hours of campaigning and millions of dollars spent, it’s entirely possible that, at the beginning of 2019, Conor Lamb and Rick Saccone will both be members of Congress.