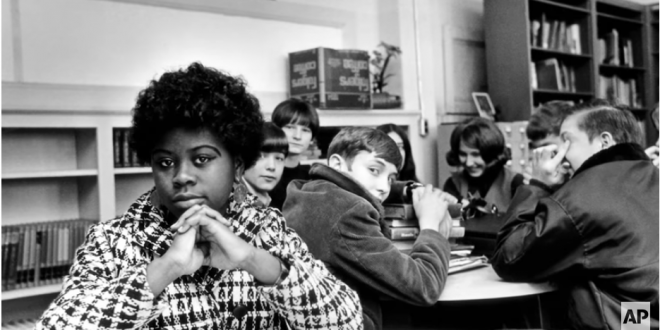 Linda Brown Of Brown V Board Of Education Dies At 76

Linda Brown, who as a schoolgirl was at the center of the landmark U.S. Supreme Court case that rejected racial segregation in American schools, died in Topeka, Kan., Sunday afternoon. She was 76. Her sister, Cheryl Brown Henderson, confirmed the death to The Topeka Capital-Journal.

The 1954 U.S. Supreme Court case, Brown v. Board of Education, involved several families, all trying to dismantle decades of federal education laws that condoned segregated schools for black and white students. But it began with Brown’s father Oliver, who tried to enroll her at the Sumner School, an all-white elementary school in Topeka just a few blocks from the Browns’ home.

Even after the Supreme Court decision segregation in public schools continued for years. When finally nine black students enrolled at an all-white high school in Little Rock, Ark., in 1957, they had to be escorted onto the campus by federal guards.

RIP A hero for our nation!
Woman at center of Brown v. Topeka BOE case dies at 76 https://t.co/LMpS11HdJH#naacp

Linda’s father, Oliver, became lead plaintiff in Brown v. Board after trying to enroll her in an all-white school in 1951. She was denied due to her race. NAACP challenged this. The Supreme Court ruled school segregation as unconstitutional in 1954. Hero. https://t.co/tNIGE6IW5h