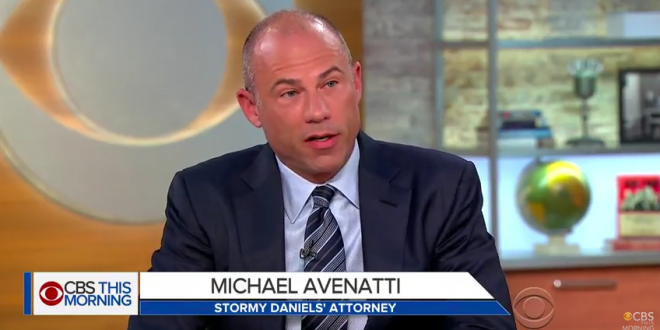 Lawyer Hints That Stormy Has “Texts And Videos”

The lawyer also hinted that Daniels, real name Stephanie Clifford has bombshell texts and videos proving the 2006 fling, said to have happened a year after Trump married FLOTUS Melania. Questioned over the existence of ‘photos, images, text messages, documents’ that prove the affair, Avenatti said it was for his client to comment.

Michael Avenatti spoke on morning news shows Wednesday on behalf of his client, Stormy Daniels, whose real name is Stephanie Clifford. He said on NBC there was “no question” Trump knew about the agreement signed days before the 2016 presidential election, though he didn’t offer any proof.

Daniels argues the agreement was not binding because Trump didn’t personally sign it. Avenatti says she was coerced into signing a denial of the affair, which began in 2006.

Cohen previously acknowledged the $130,000 payout to Daniels, but claimed that the funds came entirely from his personal account. On Monday, The Wall Street Journal reported that Cohen reportedly complained to friends that Trump did not reimburse him for the payment.

“Mr. Trump did not sign. We believe that that was so that he could later claim deniability, and therefore, from a legal perspective, we believe she’s free to talk.” -Michael Avenatti, Stormy Daniels’ lawyer on agreement pic.twitter.com/7NJyQZ4199

“We think it’s highly questionable as to whether it came from his personal funds.” Michael Avenatti, Stormy Daniels’ lawyer, on payment Michael Cohen has acknowledged publicly that he facilitated pic.twitter.com/5CSUqK9mMW