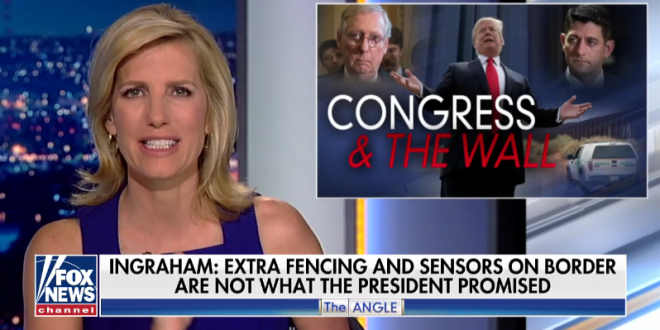 Laura Ingraham Laments: Put The Big “Bienvenido” Mat Out Because This Wall Is Never Happening [VIDEO]

Fox News host Laura Ingraham said Thursday night on “The Ingraham Angle” that the federal swamp’s $1.3 trillion omnibus spending bill that President Donald Trump backs is “an embarrassment to the president” and makes her “embarrassed tonight as a Republican.”

“The GOP just cannot get its act together,” Ingraham lamented. “My friends — I hate to say this — but as I see it right now tonight, the wall is never going to happen. If the Republicans lose the [2018] midterms, the Democrats will never fund [the wall], and we’ll be reliant on Paul Ryan’s sensors and a few drones and replacement fencing to protect America.”

“This is not what the American people voted for. And you know what really gets me? It’s an embarrassment to the president. He knew how to win this election, and the Republicans — the swamp — want to take it away from him,” Ingraham said.