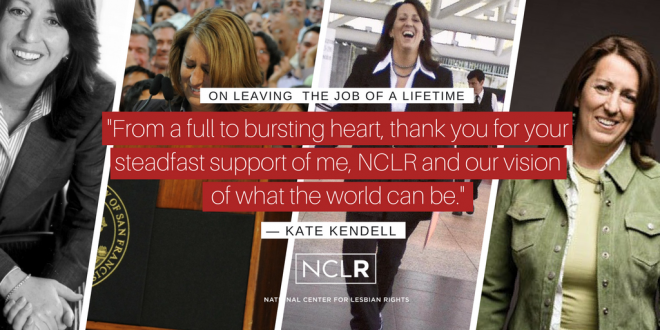 LGBT politicos nationwide were struck by the March 15 announcement that National Center for Lesbian Rights executive director Kate Kendell was stepping down after more than 22 years of service advancing social and economic justice through the lens of LGBT civil rights.

“Kate literally changed the world. Her leadership in advancing the rights of LGBT people from being criminals to being able to marry has transformed the lives of millions of people. She always pushed the envelope and was a constant voice for our movement to embrace our communities’ diversity, partner with others and embrace a progressive agenda,” says Geoff Kors, Palm Springs City Councilmember, former Equality California Executive Director, and Kendell’s “brother from another mother.” “She has an ability to connect with people on our shared humanity and move them to do the right thing even when it is politically challenging.”

“Kate Kendell’s charisma, passion and vision have resulted in NCLR becoming one of the most creative and effective advocacy organizations in this country. Every LGBTQ person has benefitted because of her incredible leadership,” said Donna Hitchens, the retired San Francisco Superior Court judge who founded NCLR in 1977.

.@KateKendell is an incredible trailblazer and a fearless fighter for civil rights. Thank you for everything you’ve done for the National Center for Lesbian Rights and the LGBTQ community. https://t.co/XBKyqsBnAI