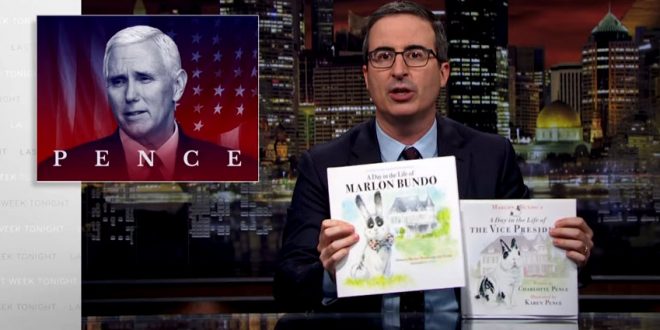 John Oliver Trolls Mike Pence’s Bunny Book With Gay Version Of His Own, Which Is Already On Sale [VIDEO]

Mike Pence’s family has created a children’s book about [their pet rabbit] Marlon Bundo, called “Marlon Bundo’s Day in the Life of the Vice President.” It drops Monday – the day after Oliver’s broadcast.

“Unfortunately one of the stops on that book tour is at Focus on the F*cking Family,” Oliver said. “So, congratulations, Pence. You’ve managed to ruin Marlon Bundo. Now none of us can enjoy a book about your rabbit. Or can we?”

By “complete coincidence” Last Week Tonight also has written a book about Mike Pence’s rabbit. “A Day in the Life Of Marlon Bundo” dropped as Oliver’s broadcast was wrapping – ahead of Pence’s Bundo bunny book.

Oliver’s book has Pence’s bunny falling in love with a boy rabbit. There’s also a Pence character in Oliver’s book – he’s a white-haired Stink Bug. And, all of the proceeds from Oliver’s book will go to the Trevor Project, which provides assistance to LGBT youth, and to AIDS United.

The voice actors in the audio version of Oliver’s book include Jim Parsons, Jesse Tyler Ferguson, John Lithgow, and RuPaul. Get either version here.