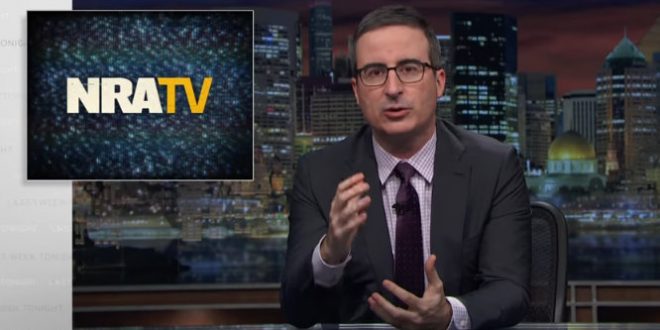 In the wake of the shooting at Parkland, Florida high school, Oliver noted that the public pressure is actually working and many companies are dropping the discounts given to NRA members. However, so far, one group has held firm — big tech companies like Amazon, Apple, and Roku have resisted public pressure are all still offering access to NRA TV.

What is NRA TV? Turns out it’s a channel that produces a lot of videos that are “trolling for your attention.” The channel has spawned odd viral videos starring country musician Charlie Daniels and spokeswoman Dana Loesch talking about the “clenched fist of truth,” as well as series like Media Lab where a gun-loving ex-military man reenacts scenes from his favorite movies, most of which involve bank robberies.

It’s not all fun with guns, according to Oliver, things on NRA TV get much darker, because the NRA wants to paint a bleak vision of America that has only one solution—guns. As Oliver puts it NRA TV is basically one long infomercial asking questions like: “Do you have ISIS sympathizers in those hard to reach places? Are you tired of getting 9/11-ed?”

Thanks for the coverage on @LastWeekTonight, @iamjohnoliver. Keep watching #NRATV and you might learn why America has a Second Amendment. #NRA pic.twitter.com/xCuM10Lvwi