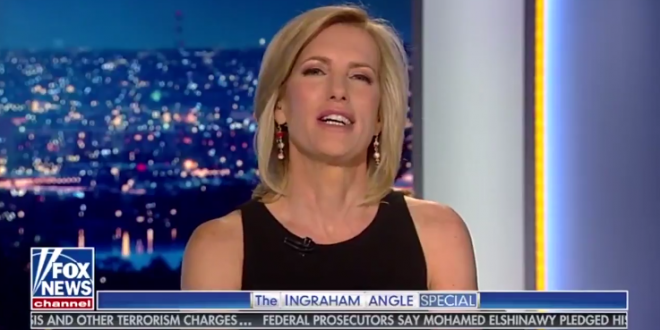 Fox News’ Laura Ingraham announced Friday she would be taking a vacation the next week to celebrate Easter with her family as advertisers have dropped her show after she criticized a Parkland school shooting survivor. Her supporters have launched the hashtag #IStandWithLaura.

In April 2017, embroiled in an advertiser boycott, Fox News’ Bill O’Reilly announced he would be taking vacation for Easter. He was later fired by the network. Fox News, which has not offered a statement, has faced a number of ad boycotts in recent years.

After Sean Hannity supported Alabama judge Roy Moore in his campaign for the U.S. senate, five companies removed their ads, including Keurig. Hannity fans then launched a boycott of Keurig posting videos of themselves destroying their coffee makers on social media.

40 minutes into Laura Ingraham show and there have been 2 commercial breaks.

But there was also a spot from the Ad Council, which is filler for when you can’t sell ads

Laura Ingraham says she’s taking a vacation next week, following at least 14 advertisers dropping her show in one week. https://t.co/CUMucrj4x0

@mmfa After losing many sponsors for attacking @davidhogg111 Laura Ingraham announces she’s going to be on vacation next week: I’ll be off next week for Easter break with my kids. pic.twitter.com/zpe5cDGVb3

Previous CHATTER AWAY: Overnight Open Thread
Next Roseanne Barr: Trump Has Freed Hundreds Of Children Each Month From Pimps And Sex Trafficking Rings