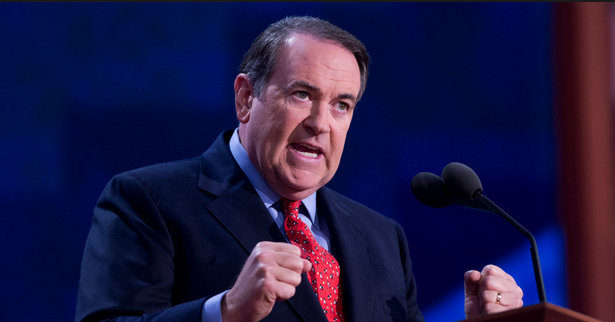 Huckabee Quits Board Of Country Music Association After One Day, Whines That Hateful Bullies Have Won

Former Arkansas governor Mike Huckabee, who, less than 24 hours after taking a post on the board of the Country Music Association Foundation, stepped down from his position amid furor in Nashville over his hardline politics and anti-LGBTQ stance, has published the letter tendering his resignation to the CMA Foundation.

In it, the conservative radio host lambastes “irrational vitriol directed toward [the CMA Foundation] or me for my religious or political views that necessitated my abrupt departure,” and defends his commitment to music education, hailing the “transformative” impact that musicianship had on his life growing up in Arkansas.

Until recently, the arts was the one place America could set aside political, geographical, racial, religious, and economic barriers and come together. If the arts community becomes part of the polarization instead of bridging communities and people over the power of civil norms as reflected in the arts, then we as a civilization may not be long for this earth.

All of us have deep passions about our beliefs. I do about mine. But I hate no one. I wish upon NO ONE the loss of life or livelihood because that person sees things differently than me.

I hope that the music and entertainment industry will become more tolerant and inclusive and recognize that a true love for kids having access to the arts is more important than a dislike for someone or a group of people because of who they are or what they believe.

Got home from 28 hour trip from Taipei that lasted longer than my time on CMA Foundation board. Read my FULL letter of resignation and see that “Hate Wins” and bullies care about themselves than kids needing music. https://t.co/uDzMD6NbFc