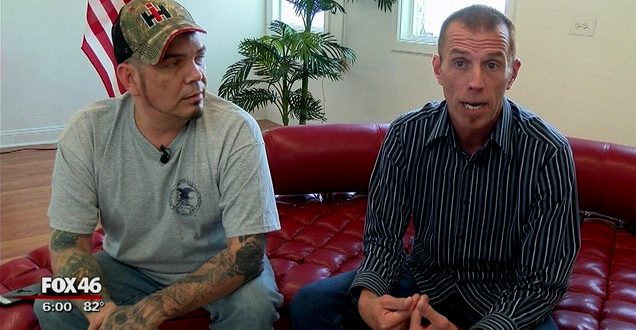 From the far-right Big League Politics:

The Proud Boys are a fraternal organization of Trump supporters with two requirements for membership: Each member must be biologically male and believe that “the West is the best.” The group was founded by Gavin McInnes, political activist and co-founder of Vice Media and Vice Magazine.

“Every single Proud Boy I have met have been very accepting of me and our organization,” said Brian Talbert (above right), founder of Deplorable Pride, a group of gay Trump supporters. “Not many hate groups accept gays,” Talbert added. Talbert said that the SPLC’s ignorance only proves they have never once met a Proud Boy and know nothing of what the group stands for.

“Hate is a strong word and to level that toward a group they have never met proves their bias and their true agenda,” he said. “Our LGBT organization, Deplorable Pride, will always be an ally to the Proud Boys.”

Here’s what the SPLC says:

Their disavowals of bigotry are belied by their actions: rank-and-file Proud Boys and leaders regularly spout white nationalist memes and maintain affiliations with known extremists. They are known for anti-Muslim and misogynistic rhetoric.

Proud Boys have appeared alongside other hate groups at extremist gatherings like the “Unite the Right” rally in Charlottesville. Indeed, former Proud Boys member Jason Kessler helped to organize the event, which brought together Klansmen, anti-semites, Southern racists, and militias.

McInnes himself has ties to the racist right and has contributed to hate sites like VDare.com and American Renaissance, both of which publish the work of white supremacists and so-called “race realists.” He even used Taki’s Magazine — a far-right publication whose contributors include Richard Spencer and Jared Taylor — to announce the founding of the Proud Boys.

You may recall that last year Charlotte Pride banned Deplorable Pride from their parade, prompting the homocons to then partner with a right wing group that organizes boycotts of any company perceived to be anti-Trump. Wells Fargo, the main sponsor of Charlotte Pride, essentially told them to get fucked.

RELATED: From the Daily Beast.

Veterans of failed Alabama Senate candidate Roy Moore’s campaign have quietly taken on their next venture: ownership of a right-wing news site run by a former Breitbart writer who’s called Alex Jones “my Walter Cronkite.” The site, Big League Politics, is a notable outpost of pro-Trump viewpoints and anti-liberal conspiracy theories on the internet. Earlier this month, @MooreSenate, the Twitter account belonging to Moore’s campaign was transferred to Big League Politics. The account’s 75,000 or so followers were kept intact, but metadata shows that the account’s handle and profile were changed.