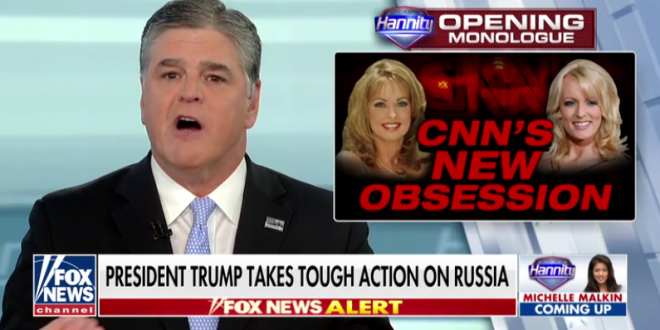 At the top of his program Monday night, Fox News’ Sean Hannity absolutely tore into CNN’s Anderson Cooper for his two blockbuster interviews with former Playboy Playmate Karen McDougal and adult film star Stormy Daniels. And Hannity took some pointed personal shots at the CNN host while criticizing the interviews. Stating that CNN has been completely obsessed lately with the alleged sexual affair Daniels had with President Donald Trump, Hannity brought up McDougal, describing Cooper’s interview with her as “creepy.”

Hannity went on to call the excerpts from the 60 Minutes interview “tabloid trash” before comparing the CNN anchor to a well-known purveyor of trash TV. “After back-to-back, lewd, cringeworthy, creepy interviews with Stormy Daniels and Karen McDougal — again allegations of a consensual relationship — it looks like Anderson Cooper has turned into CNN’s Jerry Springer,” the conservative commentator exclaimed.

Up next I’m joined by Juanita Broaddrick & Paula Jones: two women who accused Bill Clinton of sexual misconduct and were widely ignored by the mainstream media. They will share their stories right here on #Hannity

Journalism is dead in this country. Tonight in my opening monologue I’ll explain the media’s blatant hypocrisy in their coverage of President Trump. @MonicaCrowley & @MichelleMalkin will be here at the top of the hour to weigh in on #Hannity

Tonight I expose just how corrupt the media is. Hannity 9pm est. Fox News. REAL news. You may want to roll tape!!