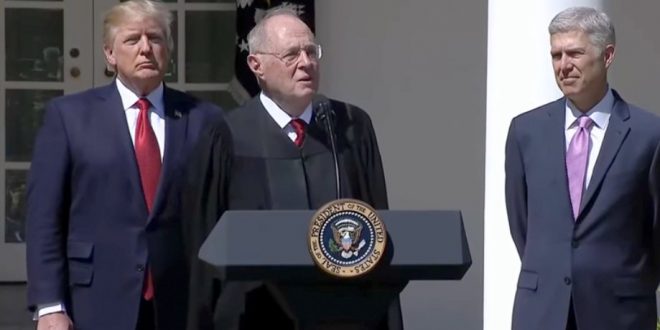 Dean Heller knows he’s the most vulnerable Republican senator in the country. But he thinks Supreme Court Justice Anthony Kennedy might just help him hang on to his seat. “Kennedy is going to retire around sometime early summer,” Heller predicted in Las Vegas last week, according to audio of an event he spoke at that was obtained by POLITICO. “Which I’m hoping will get our base a little motivated because right now they’re not very motivated. But I think a new Supreme Court justice will get them motivated.”

The 45-minute recording of the media-shy Heller shows a senator defending President Donald Trump repeatedly, breaking only delicately with the president on issues like trade and gun control. It’s in line with the tightrope Heller has to walk to have any hope of winning reelection against a Trump-inspired Republican primary opponent and a highly touted Democratic general election challenger — in a state that Hillary Clinton won in 2016.

Last June, multiple reports said Kennedy was considering announcing his retirement. But the 80-year-old justice seemingly quashed those rumors in January when he hired four law clerks for the October 2018 term.

Kennedy, who was appointed to the court by former President Ronald Reagan, is considered the most pivotal justice on the Supreme Court and is often known for casting the tie-breaking vote in key decisions.

While he’s among the court’s conservative justices, he has sided with his liberal colleagues at times, including on the court’s 2015 decision in Obergefell v. Hodges, which allowed same-sex marriage nationwide.