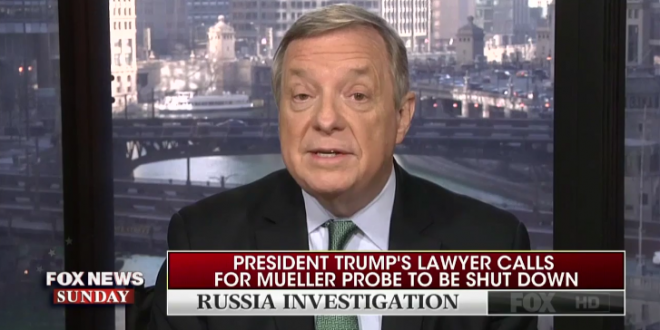 Dem Sen. Dick Durbin: Trump Is Engaged In Desperate And Reckless Conduct In His Attacks On FBI [VIDEO]

Trump lashed out earlier Sunday against Mueller, accusing the lifelong Republican of filling his office with Democrats pursing a partisan agenda under the guise of an investigation into allegations that the president’s campaign colluded with Russian efforts to interfere in the 2016 election. The president’s attacks have once again stirred speculation that he might try to fire Mueller and end his investigation, which Trump has long labeled a “witch hunt.”

“If the president reaches out and stops this investigation, that is a constitutional crisis in this country. That’s been said by Democrats and Republicans alike,” Durbin (D-Ill.) told “Fox News Sunday.“ “What it means is: It would be incumbent on Congress on a bipartisan basis to use the tools at its disposal.”