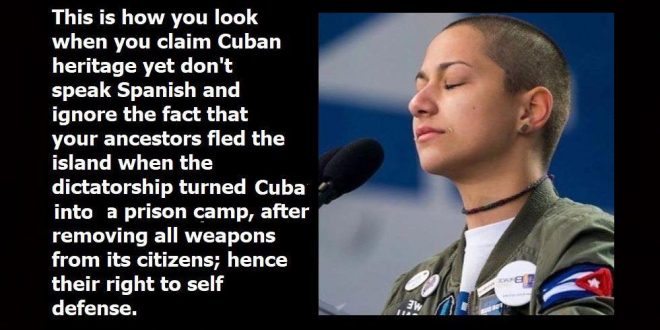 Controversial congressman Steve King responded to hundreds of thousands of people marching in the streets against gun violence by mocking the Parkland survivors still mourning the deaths of their classmates. The western Iowa Republican’s team spent its Sunday insulting those involved with March for Our Lives, including personal attacks on the teenagers who lived through last month’s attack that killed 17 people in Florida.

King’s page later denied that it was bullying the teen, who has been the victim of right-wing vitriol over speeches remembering her classmates and calling for stricter gun laws, and said that it was strictly focused on communism in Cuba, whose flag Gonzalez was wearing on her arm. “Team King” also repeatedly waded into the infested waters of the comment sections below the posts and clicked “like” on at least two posts comparing Gonzalez and fellow students David Hogg to communists.

Reached for comment early Monday morning by The Washington Post, a spokesman for King’s campaign said that the King for Congress Facebook page is managed by the campaign team, not the congressman himself. “And the meme in question obviously isn’t an attack on her ‘heritage’ in any way,” the spokesman wrote in an email. “It merely points out the irony of someone pushing gun control while wearing the flag of a country that was oppressed by a communist, anti-gun regime. Pretty simple, really.”

King, as most of you probably know, is infamous for openly racist and white supremacist statements. Last year the Nazi site Daily Stormer claimed King as one of their own, calling him “our guy.”