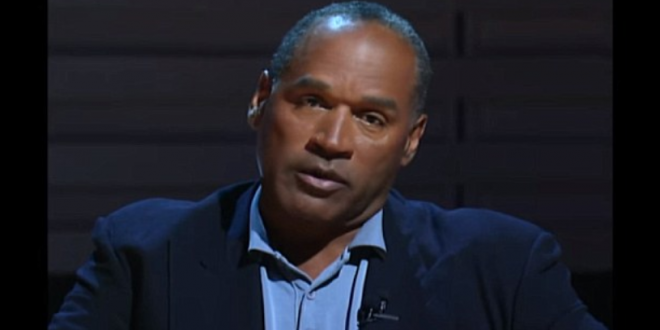 In the view of prosecutor Christopher Darden, O.J. Simpson confesses to the murders of Nicole Brown Simpson and Ron Goldman in his 2006 TV interview that aired Sunday night as a two-hour special on Fox, 12 years after a public outcry forced the network to scrap an earlier plan to air the incendiary footage.

In the 2006 interview with publisher Judith Regan, Simpson goes through a “purely hypothetical” discussion of what happened on the night his ex-wife and Goldman were murdered on the steps of Nicole Simpson’s Brentwood condo. Simpson was acquitted of the double murders by a jury in 1995 after an 11-month trial that set the modern template for a media circus.

The bizarre 2006 interview features Simpson speaking in detail, albeit couched as a hypothetical, about his being present at the crime scene in June 1994, how he disposed of bloody clothes and other specifics of his actions following the brutal slayings. He repeatedly laughed nervously while discussing the shocking crime.

In the sit-down, Simpson offered what he claims is a “hypothetical” explanation for the murders. He described, for instance, how a man named Charlie came along with him and helped him ditch the knife and his bloody clothes — because, “Somebody’s gotta get rid of the bloody clothes.”

At one point in the interview, Simpson appeared to admit to dropping the infamous bloody glove that was found at the murder scene and later used during his trial to help acquit him. “I had no conscious memory of doing that, but obviously I must have, because they found a glove there,” Simpson said.

Simpson — who was acquitted in criminal court for the murders, but found liable in civil court — slipped up several times like this during the interview, making statements like “I remember” and “I was” numerous times, much to the chagrin of the Fox panel gathered to discuss the airing.