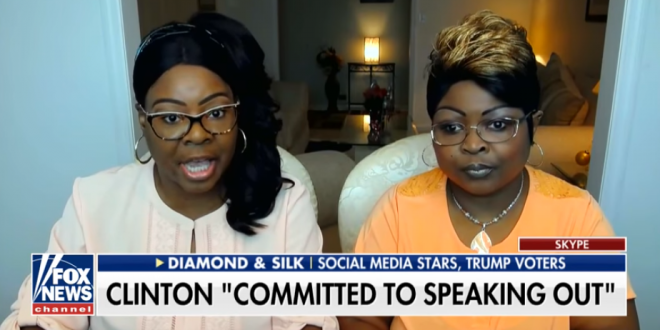 So this happened this morning on Fox & Friends:

Staunch pro-Trump vloggers Diamond & Silk made an appearance on Fox & Friends to talk about, in part, how awful and evil Hillary Clinton is. What was most alarming about this particular diatribe from the duo, however, was their completely false claim that the former secretary of state sold a bunch of uranium of Russia and now the country has nuclear weapons.

“I think and we think that Hillary Clinton reminds us of a nasty sore that’s rotten to the core that really won’t go away,” Diamond said, as Silk said “That’s right” to punctuate her every point.

“And listen, I think it’s time for her to go somewhere and be quiet,” Diamond continued. “If she’s going to be on the national platform, or on her little platform, she needs to talk about her dirty deeds. How she paid for that fake dossier to try to undermine President Trump during the election. How she sold 20 percent of the uranium to Russia and now Russia have nuclear weapons. And you know that uranium is bomb-making material.”

Fox reran their most of their comments in the following hour but edited out the batshit portion excerpted above. You can see it, though, in the clip below. As the entire world outside of Fox & Friends knows, Russia acquired nuclear weapons nearly 70 years ago.

Previous BREAKING: Wife Of Pulse Gunman Found Not Guilty
Next POLL: Most Young People Say Trump Is Racist And Unfit