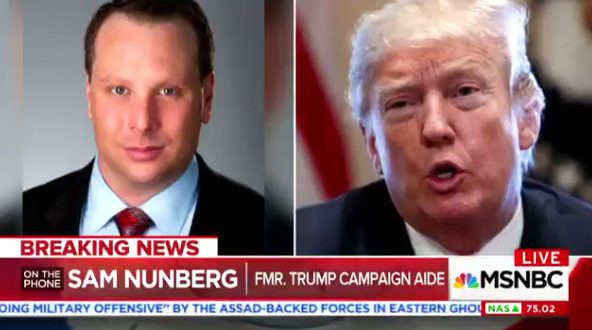 President Trump’s former campaign adviser, Sam Nunberg, openly flaunted the fact that he is refusing to comply with a subpoena from Special Counsel Robert Mueller on Monday, telling MSNBC’s Katy Tur: “I think it would be funny if they arrested me.”

Nunberg nevertheless suggested to Tur that “Trump very well may have done something during the election,” though he claimed, “I don’t know that for sure.” At the end of the interview, Nunberg asked Tur what she thought Mueller might do to him. “I’m not a lawyer,” she answered, “but I think he’ll hold you in contempt of court.”

“I’m 1st person to go out here & say I’m not cooperating. B/c it’s absolutely ridiculous what they want from me. Should I spend 80 hours going over e-mails?..it would be funny if they arrested me” pic.twitter.com/U1yqW7yXbv

Nunberg argues that Russian agents hacking Hillary Clinton’s emails was “fine” because “she should have protected her e-mails.”

(FACT CHECK — the emails that were hacked and released by WikiLeaks weren’t Hillary’s, but were the DNC’s and John Podesta’s.) pic.twitter.com/j89SRZQIGI

KATY TUR: “Do you think that they [i.e., Mueller] have something on the president?

NUNBERG: “I think they may… I think he may have done something during the election. But I don’t know that for sure.” pic.twitter.com/RWkKZwJFw9