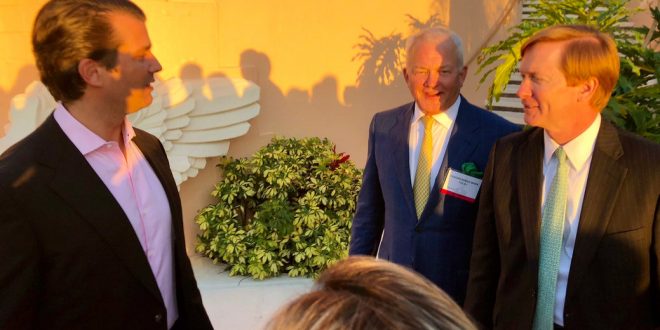 Putnam tweeted thanks to host Donald Trump Jr. last night with a photo that included Mark Foley, the Florida congressman forced out more than a decade ago for sending texts to teen boys. It did not go without notice.

Foley, not incidentally, still maintains a campaign fund because, as he puts it, “I could run for office again.”

Thanks to @DonaldJTrumpJr for hosting us at Mar-a-Lago in Palm Beach. pic.twitter.com/TihChUcfpl

Photo on the right includes disgraced ex-Rep Mark Foley who resigned after reports he had sent inappropriate emails to teenage boys who had served as congressional pages. https://t.co/GUj6eThoUP

Lmao Adam Putnam is running for Florida governor and carved out some time to hang out with Mark Foley at Mar-a-Lago today https://t.co/E9i648TM0Z

Mark Foley (helpfully pictured with name tag on), who had to quit Congress for sending sexually explicit messages to teenage Congressional pages, hanging out with the president’s son and a Republican gubernatorial candidate tonight at the president’s Florida resort: https://t.co/N6xOXvXCg5

So now Jr. is hosting pedophiles of little boys!!