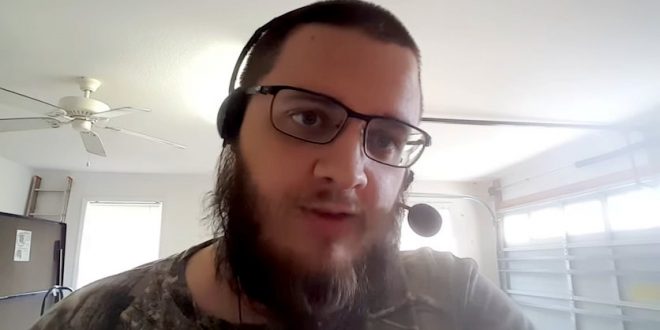 Jordan Jereb was led away in handcuffs from his mother’s Tallahassee home Wednesday after the FBI searched for evidence in connection with misinformation he gave regarding the shooter in last month’s Parkland school massacre. Jereb was arrested on charges of violation of probation by the Florida Department of Corrections Probation office. He was on probation for a 2016 charged of extortion by threats which he pleaded no contest to in December of that year.

After Nikolas Cruz opened fire inside Marjory Stoneman Douglas High School on Feb. 14, killing 17 people, Jereb said that Cruz had done paramilitary training with the white nationalist group Jereb leads. Jereb later walked back on the claims he made to the Anti-Defamation League and others, but not before the story was picked up by the Associated Press and then in news publications and outlets around the world.

NOW: @TallyPD is outside a home on the 900 block of Park View Drive. FBI agents have a search warrant for the residence believed to be that of Republic of Florida leader Jordan Jereb. @abc27 pic.twitter.com/I0fMMnzpo4

BREAKING: Jordan Jereb was escorted out of the home in handcuffs. He said, “I didn’t do anything wrong. I’m a good person.” @abc27

JUST IN: WCTV has learned, through the court database, that Jordan Jereb was taken into custody for a violation of probation of extortion by threats. https://t.co/gFxuufNaaP

There you have it. Jordan Jereb’s mugshot after today’s FBI raid of his mother’s house in the Piney Z neighborhood. I’ll have more in live reports tonight on @abc27, starting at 5 PM. pic.twitter.com/Lbg45YJcn6

Previous REVEALED: McCabe Oversaw Criminal Probe Of Jeff Sessions For Lying About His Contacts With Russians
Next PENNSYLVANIA: Trial Begins For Parents Charged In Faith Healing Death Of Their Two Year Old Daughter