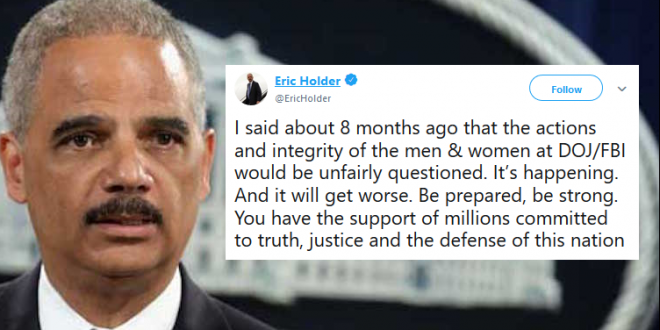 Eric Holder To DOJ/FBI: Be Strong, It Will Get Worse

Former Attorney General Eric Holder (D) urged officials at the Department of Justice and the FBI to “be strong” in the face of attacks.

McCabe defended himself after his firing, calling his dismissal an attempt to undermine special counsel Robert Mueller’s probe into Russian election interference and possible ties between the Trump campaign and Russia.

I said about 8 months ago that the actions and integrity of the men & women at DOJ/FBI would be unfairly questioned. It’s happening. And it will get worse. Be prepared, be strong. You have the support of millions committed to truth, justice and the defense of this nation