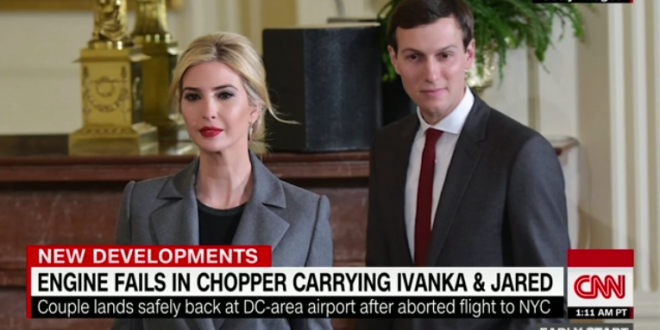 A helicopter carrying Ivanka Trump and Jared Kushner had to return to an airport in Washington on Thursday after one of its engines failed, two law enforcement sources told CNN.

President Trump’s daughter and son-in-law were flying from Washington to New York on Thursday afternoon in a two-engine helicopter when one engine failed, causing the chopper to return to Washington.

The helicopter safely made it back to Ronald Reagan National Airport and the couple scrambled to get on a commercial flight instead. The sources could not say why the couple were flying to New York via a helicopter instead of a plane. The aircraft was a Sikorsky helicopter owned by the Trump Organization

The first tweet below is from a right wing radio host.

ASSASSIN ALERT! Samantha Power’s threat to @POTUS was carried out today when Ivanka and Jared and their kids were nearly killed as their helicopter was sabotaged and crashed. They survived. Brennan needs to be arrested.

Helicopter from DC to NYC? Maybe they should spend their waning time in the White House pushing for Amtrak funding. You don’t need a security clearance for that. https://t.co/jGWX3hxH8C

Ivanka Trump and husband Jared Kushner had a scare three days ago – when one of the two engines in the helicopter they were flying in failed, CNN’s @ShimonPro reports. The couple was flying from Washington to New York when the incident occurred