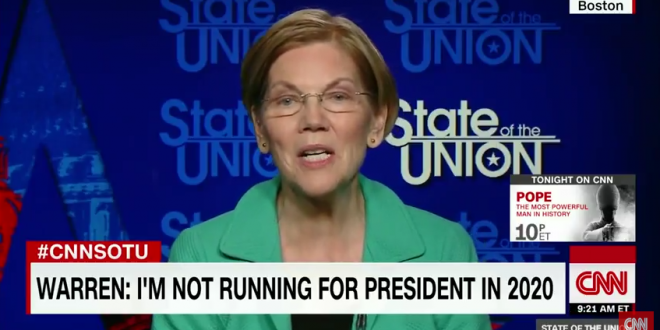 Sen. Elizabeth Warren insisted Saturday night that she was not running for the White House in 2020, but the Massachusetts Democrat repeatedly dodged on whether she would serve her full six-year term if she wins re-election to the Senate this November.

“I am in this fight to retain my Senate seat in 2018. That’s where I’m focused,” Warren told NBC’s “Meet the Press” host Chuck Todd, in an interview scheduled to air in full on Sunday. “That’s where I’m going to stay focused. I’m not running for president.”

Here’s the video of President of the United States calling Elizabeth Warren “Pocahontas” again, a name many Native Americans consider a slur. (via Fox) pic.twitter.com/i4vdsqfgTc

Today, the President called a journalist a “sleeping son of a bitch”, called a Black Congresswoman a “very low IQ individual”, and once again referred to a Senator with the “Pocahontas” slur, but sure, it’s the teen school shooting survivors that are ruining the discourse.

Sen. Elizabeth Warren: “I am not running for president in 2020” https://t.co/V2f6huafbC https://t.co/zMbx5YJUkx