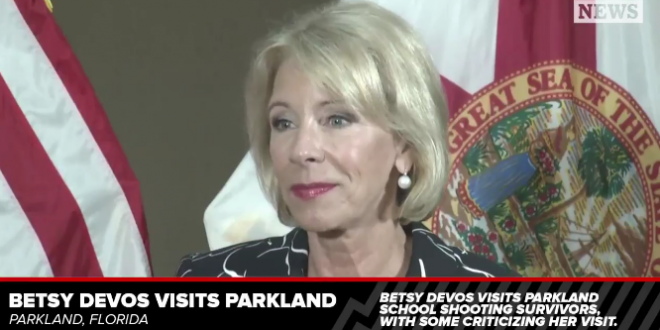 Education Secretary Betsy DeVos defended President Trump’s plan to arm some teachers to protect students from shootings in remarks on Wednesday after visiting the site of the Parkland, Fla. high school massacre. “Let’s be clear. I think to say ‘arming teachers’ is an oversimplification and a mischaracterization, really,” DeVos told reporters after meeting with students and faculty at Marjory Stoneman Douglas High School.

“The concept is for those schools and those communities that opt to do this is to have people who are expert in being able to defend, and having lots and lots of training in order to do so.” Students from the school have launched a national effort to address gun violence and school shootings in the wake of the tragedy, with a pro-gun control “March for Our Lives” planned for the National Mall in Washington later this month.

A reporter asks @BetsyDeVos if she made any promises to the Parkland students this morning. This was her response. pic.twitter.com/gCmBbQDb1Q

I thought she would at least give us her “thoughts and prayers,” but she refused to even meet/speak with students. I don’t understand the point of her being here

Do something unexpected: answer our questions. You came to our school just for publicity and avoided our questions for the 90 minutes you were actually here. How about you actually do your job? #neveragain #DoYourJob https://t.co/4Ts0INq0gR

Betsy Devos came to my school, talked to three people, and pet a dog. This is incase the press tries to say something else later

.@BetsyDeVos leaves a press conference when pushed for specifics on what gun legislation she’d support. A reporter is overheard saying, “5 questions? That’s it? Are you kidding me?” pic.twitter.com/xgiZaYrE4p