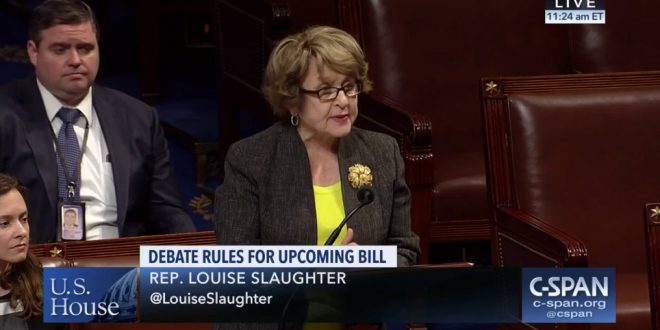 Democratic Congresswoman Louise Slaughter, who had represented the Rochester area in Congress since 1987, has died. She was 88. Three sources confirmed the death to the Democrat and Chronicle Friday morning. Her office later released a statement confirming her passing.

Her office revealed earlier this week that she had suffered a head injury after a fall, and had been hospitalized with a concussion. Slaughter was the oldest member of the House of Representatives.

Slaughter was elected to the House of Representatives in 1986, defeating Republican Fred Eckert in a close race and becoming the first women to represent Western New York in Congress.

A real tragedy, Rep, Louise Slaughter was a champion on our issues, particularly #NetNeutrality. Originally from Kentucky, she never lost her accent despite serving Western NY/Rochester for decades. https://t.co/wnGPsON6oi

NEW: Rep. Louise Slaughter has passed away following an injury last week, her office says. She was 88 and in her 16th term in Congress. https://t.co/MFUQfrrKlh pic.twitter.com/FSbcfHLm3P

Louise Slaughter died in office at age 88, despite speculation for years that she would retire.

She once told me, “People shake my hand and check my pulse” but that she would keep running.https://t.co/CZfT9dVHNl

Her office clarifies in a statement that Slaughter “passed away early this morning surrounded by family at George Washington University Hospital.”

Louise Slaughter has passed away overnight. She was a champion for women and for reproductive rights throughout her entire life and she will be dearly missed. Louise, we stand on your shoulders and will carry your work forward. #shero

“For three decades, Congresswoman Slaughter fought tenaciously on behalf of New Yorkers and all Americans, blazing a trail as one of the most powerful and influential women in Congress,” said HRC President Chad Griffin.

“Congresswoman Slaughter was proud to be a strong champion for the LGBTQ community and was one of the earliest Members of Congress to support marriage equality. She also fought for the repeal of ‘Don’t Ask, Don’t Tell’ and passage of hate crimes protections, was an original co-sponsor of the Equality Act, and a longtime member of the LGBT Equality Caucus. Our hearts go out to her family, friends and all those whose lives her work personally touched.”

Congresswoman Slaughter has been a champion for the LGBTQ community her entire career. She was one of only 67 Members of Congress to vote against the discriminatory Defense of Marriage Act in 1996, earned a perfect 100 score on HRC’s most recent Congressional Scorecard, and spoke out strongly against Donald Trump’s attempts to implement a transgender military ban.