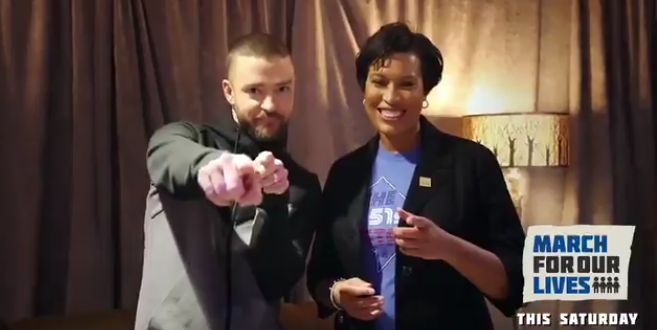 D.C. Mayor Muriel Bowser and singer Justin Timberlake teamed up to welcome the thousands of protesters who are expected to descend on the District for the “March for Our Lives” rally Saturday.

“As mayor of Washington, D.C., I’m pleased to welcome students and families supporting the ‘March for our Lives’ this Saturday,” Bowser says in a video posted on Timberlake’s Instagram page. Bowser and Timberlake also urged people to get involved and join the march.

“It’s been so inspiring seeing young people out there owning their voice and getting ready to own their vote,” Timberlake said. “We need you to show up, too.”

Washington Mayor Muriel Bowser on Tuesday rolled out the district’s plans for the upcoming March for Our Lives, unveiling a sweeping set of preparations, including Metro closures and restricted access to President Trump’s D.C. hotel.

D.C. residents and visitors can expect the Federal Triangle Metro station to be closed for the duration of the march, as well as limited access to the Judiciary Square station. At the same time, Washingtonians will also be hit by street closures during the march, including sections of the centrally located Pennsylvania and Constitution Avenues.

As I noted in today’s post about the coming nor’easter, air and rail travel might still be a mess by the weekend, so plan accordingly.

Best bet for friends coming to #marchforourlivesDC… get them a Smartrip card early! Take a few minutes and stop by any #wmata rail station, DC-area @GiantFood or @cvspharmacy and grab a card with enough round-trip fare. https://t.co/PYXA8FsDTf #MFOLDC

I’m so inspired by the #MarchForOurLives students out there owning their voices. We need to demand action. Get out there and join the march this Saturday — more info here: https://t.co/PviopFKjAo pic.twitter.com/7sQxjLUyQX