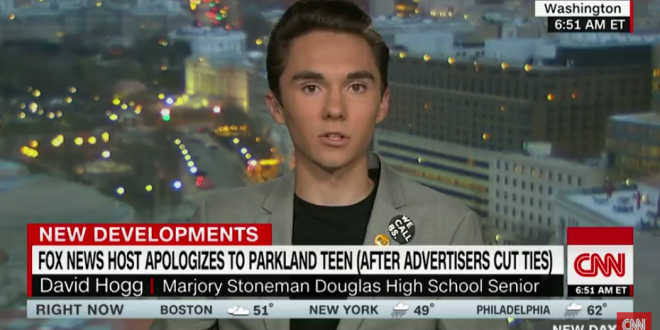 David Hogg: These Personal Attacks Only Prove That What We’re Doing Is Working, They’re Scared [VIDEO]

Camerota pointed out that Ingraham is a conservative talk show host, and isn’t objective, before noting that she apologized for her tweet poking fun at Hogg.  “Do you accept her apology?”

“No,” Hogg said. “She’s only apologizing after a third of her advertisers pulled out. I think it’s wrong. And I think if she really wants to do something she could cover inner-city violence and the real issues that we have in America,” he continued. “I know she is a talk show host, but as such she also has a responsibility to show both sides of the story.”

Hogg also responded to some of the conspiracy theories leveled against him and his fellow Parkland students. “It shows that what we’re doing is working. We have them scared, and it means we have to go even harder.”

Camerota then turned to Hogg’s choice of colleges. “David, I am stunned that four colleges rejected you,” she exclaimed. “What kind of dumbass colleges don’t want you? You have taken the country by storm. How do you explain this, did they reject you before the Parkland massacre?”

“They rejected me about — let me think, about two weeks ago, most of them,” he replied. “It goes to show, regardless of whether you get into college, you can still change the world,” he explained. “The hardest part is believing you can, but you eventually will.”

The list of advertisers dumping Ingraham continues to grow, with Johnson & Johnson, Nestle, and Hulu joining several others late yesterday.