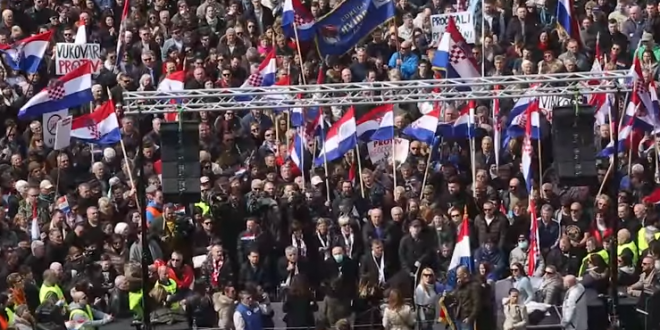 The protesters sang patriotic songs and chanted slogans against Croatia’s centre-right government, which last week approved the Istanbul convention that was adopted by the Council of Europe in 2011, but still hasn’t been ratified by Croatia’s parliament.

Croatia’s conservative opposition and the Catholic Church — the organizers of the protest — said they support combating violence against women and domestic violence, which is the main point of the convention, but are against its alleged introduction of “a third gender” into society.

Today, the people of Croatia formed a massive protest numbering about 50,000 people against the ratification of the EU Istanbul Convention which would not only take 166 million USD out of the budget, but also openly insert leftist ideological propaganda into our schools. pic.twitter.com/pSJyDMul6W

#Croatia: #protests against the ratification of the Istanbul Convention.
According to the police, 2,000 people participated in the protests #hrvatska #yugoslavnews pic.twitter.com/WRBMa8eiju

Thousand protest against Istanbul Convention in #Zagrebhttps://t.co/gLswOHwYJw #IT #croatia pic.twitter.com/FEEzYL6j8n

Previous Trump: Many Lawyers Want To Represent Me On Russia
Next State TV Host: I Don’t Need Kids Lecturing Me On Gun Laws So This Morning I Donated To The NRA [VIDEO]