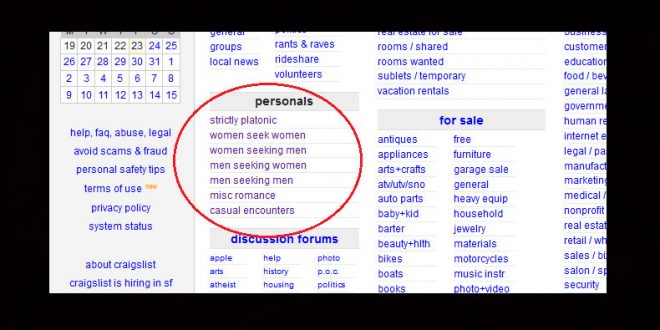 The popular classifieds website has announced it has pulled its personal ads section from the site. Craiglist made the move after the passage of the Allow States and Victims to Fight Online Sex Trafficking Act (FOSTA) on Wednesday. The act makes it easier for sex trafficking victims and prosecutors to sue websites that allowed sex traffickers to post ads on the sites. Numerous tech companies fought against the bill arguing they couldn’t be held liable for what people post on their platforms.

Some users have vented their frustration on Twitter at the purge of personal ads, with many also mourning the loss of the site’s Missed Connections posts. Missed Connections allowed users to post serendipitous messages searching for people they’d randomly spoken to or shared eye contact with on the train, for example.

In the most ideal of situations, a bill like FOSTA could play a role in fighting off sex trafficking. In reality though, the bill (as is the case here) is causing a chilling effect that gooses sites like Craigslist to close up at least part of their shop and actively hurts consenting sex workers who rely on the website. As drastic as it may seem, it’s easy to understand the why of Craigslist’s decision to avoid the consequences of FOSTA, but the question now is whether other sites frequently used by sex workers will follow suit.

Craigslist has posted a short statement:

US Congress just passed HR 1865, “FOSTA”, seeking to subject websites to criminal and civil liability when third parties (users) misuse online personals unlawfully. Any tool or service can be misused. We can’t take such risk without jeopardizing all our other services, so we are regretfully taking craigslist personals offline. Hopefully we can bring them back some day. To the millions of spouses, partners, and couples who met through craigslist, we wish you every happiness!