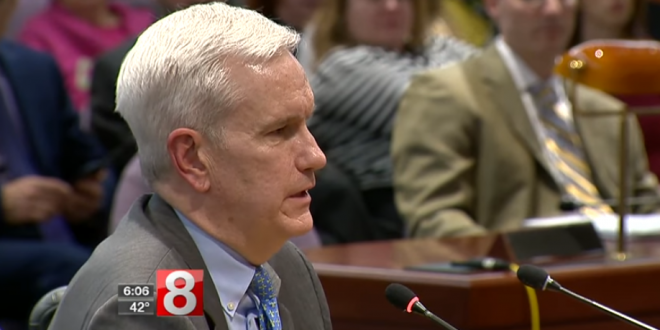 Senate Republicans voted as a bloc Tuesday to deny Andrew J. McDonald confirmation as chief justice of the Connecticut Supreme Court, stopping the ascent of a political and legal trailblazer for the gay community, a factor that opponents insisted was irrelevant and supporters said could not be ignored.

Sen. Beth Bye, D-West Hartford, the only openly gay member of the Senate, said McDonald’s treatment was a dramatic departure from previous confirmations, beginning with an unprecedented 13-hour confirmation hearing and the legislature’s second-guessing of his ethics and approach to several controversial cases.

“So forgive my skepticism that this has nothing to do with Justice McDonald being gay,” Bye said. Sen. Joan Hartley of Waterbury was the lone Democrat to vote against McDonald’s confirmation, which failed 19 to 16.

Gov. Dannel P. Malloy, a close friend and political ally of McDonald’s for the past 25 years, charged that part of the reason that Republicans are opposed to McDonald is that he is gay. But Republicans have repeatedly and heatedly denied that allegation, saying they have never mentioned McDonald’s sexuality during the weeks that his nomination has become highly controversial.

Republicans view McDonald as a deeply partisan, liberal Democratic judicial activist who inserts his personal opinions into his judicial rulings, including eliminating the death penalty.

Democrats rejected that notion, saying McDonald is a brilliant, Ivy League-educated jurist with a unique lifetime of experience in important positions in all three branches of government, including serving five years on the state’s highest court. They said it would be a challenge to the independence of the judicial branch and a major mistake to reject McDonald.

Justice McDonald had the support of much of the state’s legal establishment, including the state bar association, law school deans and other lawyer groups.

McDonald, 52, served in the State Senate and was Mr. Malloy’s general counsel before he joined the Supreme Court. As a justice, he was part of the majority that ruled that the state’s law abolishing capital punishment had to be applied to inmates who had been sentenced before the law, passed in 2012, went into effect, sparing 11 inmates from execution.

On Monday, Senator Len Fasano, the Republican leader, said that his party, which has the same number of seats as the Democrats in the Senate, would vote as a bloc against Justice McDonald’s nomination. Mr. Malloy responded with a news conference where he reasserted his support for Justice McDonald and argued that their vote was “driven by a desire to derail this historic appointment based on a political calculation or bias.”