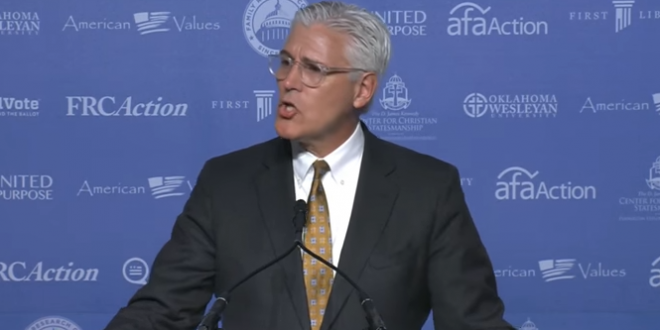 Last week I reported that Oklahoma Wesleyan president Everett Piper had penned a column in which he compares gays to ISIS. Today Piper is very unhappy about people calling him out on that.

So much for all that, and so much for any modicum of self-awareness that would recognize the obvious duplicity in all of this and the fact that you are sawing off the very rhetorical branch upon which you sit.

This is the logical end of the moral relativism of today’s identity politics. This is the blatant hypocrisy of those who promote themselves as accepting, while condemning all those they simply cannot and will not accept.

This is the inevitable consequence of our “name it, claim it” game of pretending human desires define the human being and that our personhood is little more than the sum of our proclivities; that human identity is equal to human inclination; and that “who we are” is of no more moral significance than what our libido temps us to do.