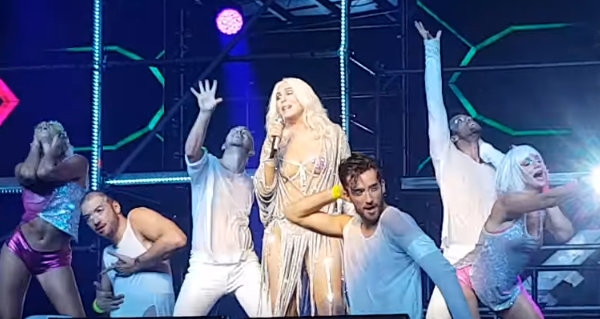 International pop star Cher brought Sydney’s Gay and Lesbian Mardi Gras to a standstill, dazzling thousands of spectators by walking out into Taylor Square in the middle of the festivities.

Cher, who was the headline act for the Mardi Gras after-party, had been rumoured to make an appearance during the parade and on Saturday night, the gay icon captivated the 300,000-strong crowd as she stepped out on to Taylor Square to the tune of Turn Back Time.

The singer, sporting bright orange hair and a low-cut black top with a silver-embroidered jacket, mingled with her many fans.
She said she loved the feeling of the parade and even chimed in about Australia’s passing of same-sex marriage laws. “It’s about time,” Cher told reporters.