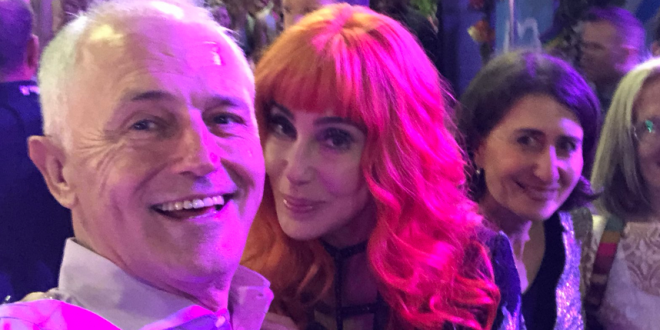 If only Cher could turn back time. The international pop star has issued a stunning online apology for appearing in a controversial photo with the Prime Minister at Mardi Gras on Saturday.

Malcolm Turnbull can be seen widely grinning in a picture with the American singer, who dazzled thousands of spectators by walking out into Taylor Square in the middle of the festivities this weekend before her performance.

However, some commenters on the selfie said the Prime Minister was to blame for the “harmful” same-sex marriage postal survey process — which they claim placed unwanted scrutiny on the LGBTQI community.

Commenters quickly responded to say that she had no need to be sorry. “You’re totally forgiven Ms Cher. You’re a good person & a fantastic ally. I don’t expect you to be all up with Aussie domestic politics,” said one commenter.

Welcome to Sydney, Cher! @GladysB Lucy and I and all your fans thrilled to be with you at the 40th Mardi Gras & first since Australia achieved marriage equality. pic.twitter.com/EIYDaq2OTG

I wonder if @cher knows just how truly terrible @TurnbullMalcolm and his party have been to the LGBTIQ community.. pic.twitter.com/Wp39iWqXoP

I’m not sure what you mean.
The Man I Talked To Seemed PROUD OF EVERYONE AT THE PARADE. Am I Missing. Something⁉️
The Man I TALKED Could Be Reasoned With,The Man I Talked TO Believes In Equal Rights for ALL OF HIS PPL.THE MAN I TAKED TO WILL LISTEN &
HEAR”& 🐝COMPASSIONATE

The man you talked to is a liar. He illegally detains refugees/asylum seekers who are PoC in off-shore concentration camps were they are tortured, abused & killed. He speaks only in support of trump. He ensured LGBTIQ people were taunted and abused for months last year. Sorry. https://t.co/WrVG3QINP0

Am so sorry. Guess that’s why I have FEW Friends Who Are Politicians.He Seemed Very Open & excited about MARDI
GRAS,AND LGBT COMMUNITY.