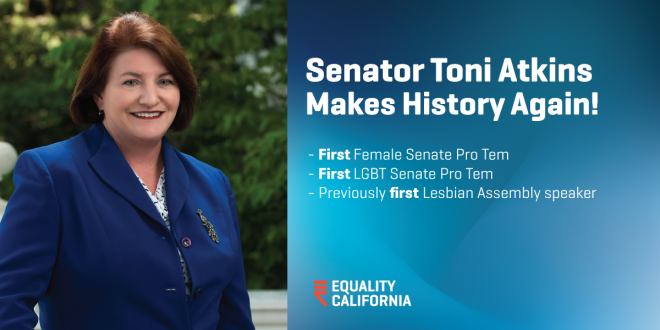 A former Assembly speaker, Atkins is taking over the post of Senate president pro tem from fellow Democrat Kevin de Leon as the chamber gears up for election season and faces a number of thorny challenges, including a reckoning over sexual misconduct, a loss of the Democratic supermajority and an icy relationship with the state Assembly.

De Leon took control of the Senate in 2014. He’s barred by term limits from seeking re-election and is challenging Democratic U.S. Sen. Dianne Feinstein. If she can keep the support of her fellow Democrats, Atkins will have an unusually long run in the Senate’s top job; she isn’t term-limited until 2024.

Equality California issued a statement in December when Atkins emerged as the consensus pick to lead the Senate:

Senator Toni Atkins is one of the LGBTQ community’s most respected and effective leaders and her upcoming election as the Senate President Pro Tem breaks multiple glass ceilings. Not only will she be the first woman to serve as leader of the California Senate, but Senator Atkins will also be the first LGBTQ person to serve in that role. This follows on her historic career in the Assembly where she became the first lesbian Speaker.

Electing role models like Senator Atkins is important to the LGBTQ community because it sends a clear message to our community across the country, particularly LGBTQ youth, that LGBTQ people can achieve anything. By having a seat at the table, LGBTQ elected officials can speak with their colleagues with authenticity and first-hand experience on issues that affect our community.

Previous REPORT: Sessions Lied About Opposing Russian Meeting
Next Eric Holder To DOJ/FBI: Be Strong, It Will Get Worse