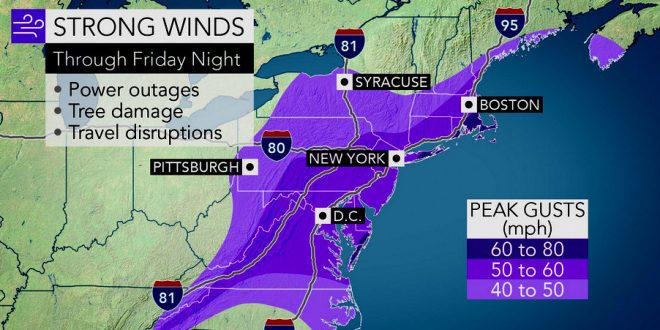 A major nor’easter pounded the East Coast on Friday, packing heavy rain, intermittent snow and strong winds as residents from the mid-Atlantic to Maine braced for coastal flooding. More than 2,100 flights were canceled by airlines, most spread across airports in the Northeast.

The Eastern Seaboard was expected to be buffeted by wind gusts exceeding 50 mph, with possible hurricane-strength winds of 80 to 90 mph on Cape Cod. Also, heavy snow fell in Ohio, upstate New York as the storm spun eastward. Boston south to Rhode Island was forecast to get 2 to 5 inches of snow from the late-winter storm.

Delta, Southwest, JetBlue and American Airlines were allowing travelers to change their Friday and Saturday flights to avoid delays and cancellations at key airports across the Northeast.

A powerful nor’easter morphed into a “bomb cyclone” Friday as it hammered the East Coast with a ferocious mix of howling winds, drenching rain, some snow and surging waves.

“Take this storm seriously!” the National Weather Service in Boston warned via Twitter. “This is a LIFE & DEATH situation for those living along the coast, especially those ocean-exposed shorelines.”

The storm — with about 80 million people in its path, including more than 22 million people under a coastal flood warning — officially “bombed out” late Friday morning when it underwent bombogenesis, signaled by an extreme drop in atmospheric pressure.

US cancellations are now at 2,189 for today. Most impacted continues to be @LGAairport with 523 flights cancelled (44% of flights) and 24 flights delayed more than 15 minutes.