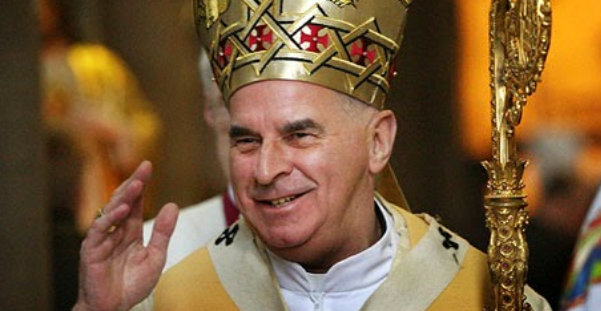 Cardinal Keith O’Brien, formerly the Catholic Church’s most senior cleric in Britain, has died at the age of 80. The cardinal, who resigned as Archbishop of St Andrews and Edinburgh in 2013 after apologising for sexual misconduct, was hurt in a recent fall. His successor administered the last rites on Friday, on the eve of the cardinal’s 80th birthday.

The collapse of Cardinal Keith O’Brien’s formidable reputation, though late in his career, was sudden and steep. Up until his 75th birthday, in 2013, he was one of the most senior figures in Scottish Catholicism and a highly decorated cleric.

The Herald, in 2015, suggested that Cardinal O’Brien had used confession by young clerics as a device for sexual grooming. The charge of hypocrisy was further compounded by his outspoken opposition to same sex marriage and apparent defence of traditional morality while allegedly engaged in predatory behaviour.

Following the initial accusations in 2013, Catholic League president Bill Donohue had declared that O’Brien was the target of false charges from the “lavender mafia.”

And then O’Brien confessed: “In recent days certain allegations which have been made against me have become public. Initially, their anonymous and non-specific nature led me to contest them. However, I wish to take this opportunity to admit that there have been times that my sexual conduct has fallen below the standards expected of me as a priest, archbishop and cardinal. To those I have offended, I apologise and ask forgiveness.”

Two weeks after that murky confession, the Scotland Herald revealed that O’Brien’s chief accuser had been his long-term boyfriend. In August 2013 it had been revealed that O’Brien had thwarted investigations into sexual abuses committed by priests under his command. And yet he gets to keep his red hat. Take that shocked look off your face.