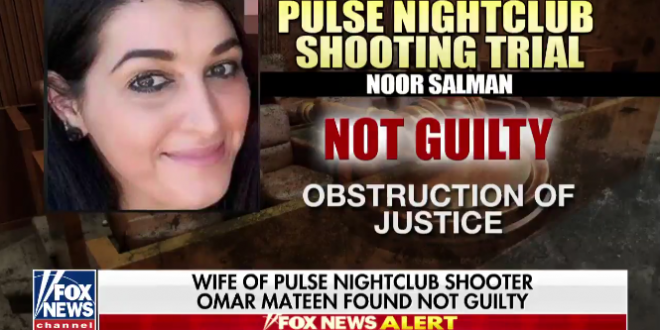 Noor Salman is not guilty of helping her husband, Omar Mateen, carry out the mass shooting that claimed 49 lives at Pulse nightclub on June 12, 2016, a jury decided Friday. The 12-member jury delivered its verdict after deliberating for about 12 hours over three days.

Salman was also acquitted of obstruction of justice. Prosecutors accused her of lying to the FBI agents who investigated her husband’s mass murder, which he carried out in support of a foreign terror group, the Islamic State.

Had she been convicted, Salman, 31, would have faced up to life in prison. Prosecutors sought to prove Salman helped Mateen prepare for the attack, joining him as he scouted possible targets and bought guns and ammunition. They also said Salman concocted a cover story to tell Mateen’s mother after he left their Fort Pierce apartment to commit the attacks.

She was accused of aiding her husband and obstructing the investigation into the attack. pic.twitter.com/Sm8RE0HeTV

NEW: Noor Salman, the wife of Pulse nightclub shooter Omar Mateen, found not guilty of aiding her husband with the massacre https://t.co/uACHXZyg4i pic.twitter.com/y4JWYcF3mW

Prosecutors said very little after Noor Salman found NOT GUILTY! Said they respect jurors decision then quickly walked away not answering any other questions. pic.twitter.com/RbL7xRjCVZ