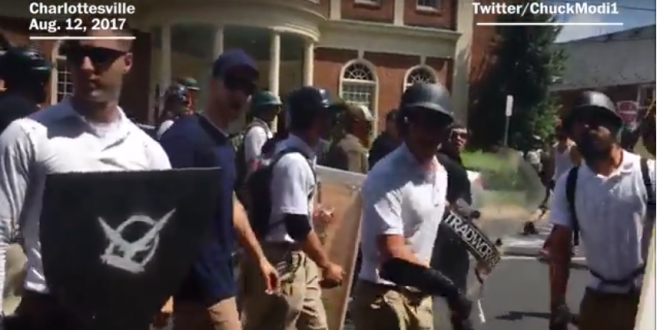 A black man brutally beaten at last year’s “Unite the Right” rally in Charlottesville — and who was later charged with assaulting a white nationalist — was acquitted Friday.

DeAndre Harris, 20, a former special education instructional assistant, was found not guilty by Charlottesville General District Judge Robert Downer Jr. on a misdemeanor charge of assault and battery against Harold Crews, a North Carolina attorney and state chairman of the self-described white nationalist group League of the South. If Harris had been convicted, he would have faced up to 12 months in jail and a $2,500 fine.

The acquittal is a relief for Harris, who was viciously beaten inside a parking garage next to the city’s police department on Aug. 12, 2017. He suffered a spinal injury and head lacerations that required 10 stitches.

Previous World Net Daily: Don’t Watch “Super-Whore” Stormy Daniels On 60 Minutes, The Interview Will Hurt Melania
Next BREAKING: Trump Threatens Stormy With $20 Million In Damages If She Doesn’t Shut Up About Affair