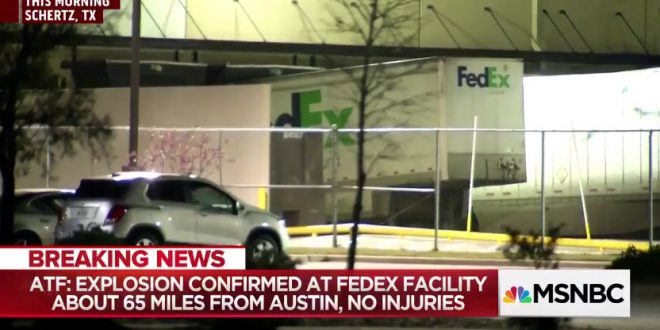 The San Antonio Texas Fire Department says a package bomb bound for Austin has exploded at a FedEx distribution center in Schertz, Texas, hurting 1 person, a FedEx employee who apparently suffered a non-life-threatening “percussion-type” injury from the blast. The FBI and ATF are at the scene.

An FBI agent told CBS “it’s more than possible” that this package is related to the explosions that have occurred in Austin in recent days. The package exploded shortly after midnight on Tuesday.

ATF and FBI agents are at the scene of the FedEx facility analyzing components of the explosive device to see if they see any similarities of ingredients or components that are “a signature” that would link this package explosion to the other four bombing incidents in Austin, reports CBS News senior investigative producer Pat Milton.

MAJOR INCIDENT SCHERTZ TEXAS AREA. This is what we have gathered unofficially:
Shortly after 12 midnight, a package destined for Austin, Tx detonated at the FedEx distribution facility located at 9935 Doerr Lane. The package was said to have contained nails and shrapnel.

Of the 75 people working at the facility, only one complained of injury described as a non life threatening percussion type injury.
All inbound and outbound packages are in limbo, and transport vehicles are in gridlock. At this hour, ATF and FBI assets are beginning to arrive.

ATF explosion confirmed at FedEx facility about 65 miles from Austin, no injuries pic.twitter.com/sdg365zAc2