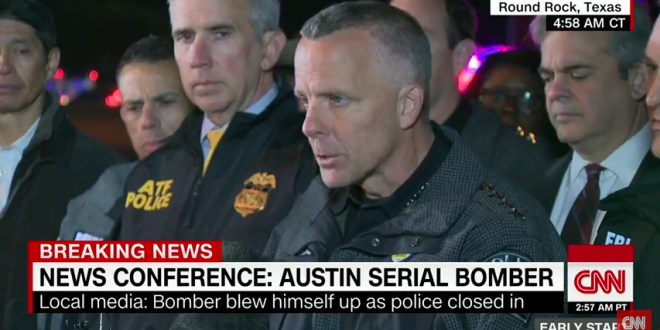 Austin Bomber Kills Himself As SWAT Team Closes In

The suspect in a spate of bombings that terrorized residents of Austin, Texas, died early Wednesday after detonating an explosive inside his vehicle as a SWAT team tried to apprehend him on the side of a highway, officials said.

Authorities had tracked the suspect — a 24-year-old white man — to a hotel in Round Rock, a city in the Austin metropolitan area, Austin Police Chief Brian Manley said at a news conference.

They tracked his vehicle until he pulled over on Interstate 35 and “the suspect detonated a bomb inside the vehicle, knocking one of our SWAT officers back,” Manley said, adding that the office sustained minor injuries.

The authorities believe the suspect who died with SWAT officers closing in on him was behind all of the bombings in Austin this month, but they’re concerned that there may be other package bombs “that are still out there.”

Austin police Chief Brian Manley said at a news conference early Wednesday that the 24-year-old suspect is believed to have been responsible for all major Austin bombings since March 2. He refused to release the suspect’s name or discuss his background, saying that the motivation for the bombings remains a mystery.

AUSTIN BOMBING SUSPECT IS DEAD. Great job by law enforcement and all concerned!