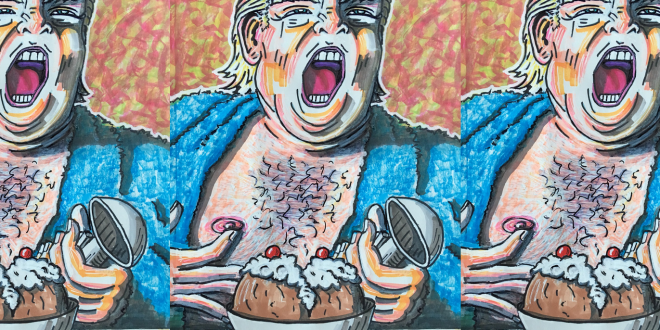 Jim Carrey has debuted on social media his official portrait of Donald J. Trump, and it’s a scathing critique of the 45th President of the United States. The image shows Trump pleasuring himself as he touches his right nipple and eats ice cream. His bowl of ice cream resembles two breasts.

The Trump portrait is just the latest politically-charged painting Carrey has released this month. The comedian received backlash from Republicans in the middle of March when he unveiled his unflattering portrait of White House press secretary Sarah Huckabee Sanders. Carrey has also painted Trump as the Wicked Witch of the West from “The Wizard of Oz.”

Dear Smithsonian National Portrait Gallery @NPG, I know it’s early but I’d like to submit this as the official portrait of our 45th President, Donald J. Trump. It’s called, ‘You Scream. I Scream. Will We Ever Stop Screaming?’ pic.twitter.com/LrCmlXXpv7

If you liked my last cartoon you may also enjoy…

“THE WICKED WITCH OF THE WEST WING AND PUTIN’S FLYING MONKEYS“ pic.twitter.com/slBG7j1s8d