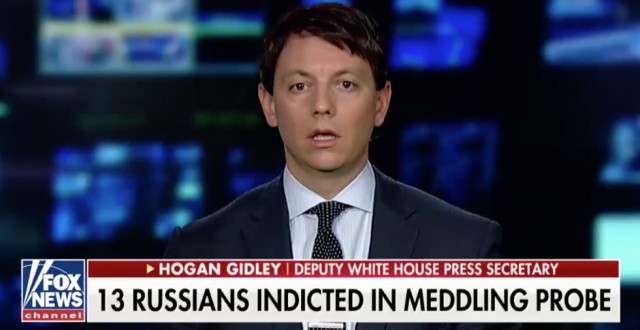 White House Spox: Democrats And The Media Have Created More Chaos Than The Russians [VIDEO]

Journalists lashed out at a White House spokesman on Saturday after the aide to President Trump claimed that news media and Democrats have caused more “chaos” than Russia.

White House deputy press secretary Hogan Gidley made the comments during an interview on Fox News while responding to special counsel Robert Mueller’s indictment of Russian nationals for meddling in the 2016 election.

“There are two groups that have created chaos more than the Russians and that’s the Democrats and the mainstream media,” Gidley asserted on Fox News. “[They] continued to push this lie on the American people for more than a year, and frankly Americans should be outraged by that.”

.@hogangidley45: “There are two groups that have created chaos more than the Russians and that’s the Democrats and the mainstream media.” pic.twitter.com/HBmruoSUn3

A reminder the DAG said yesterday Russia was engaged in “information warfare” against the US (and NSA echoed today). This is either an embarrassing misstatement by a White House official or a stunningly unsupported charge against fellow citizens. https://t.co/Ncgpj97aAt