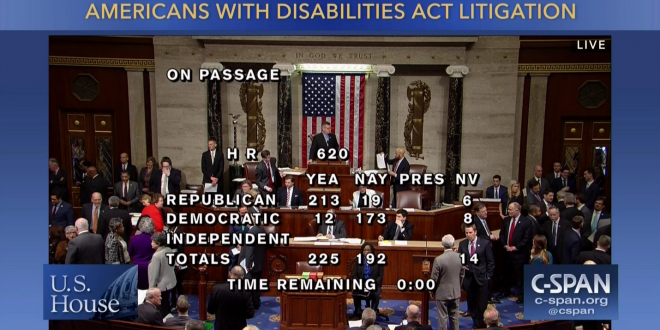 The House passed legislation on Thursday that would create additional requirements for filing lawsuits under the Americans with Disabilities Act alleging that businesses aren’t providing adequate accommodations as mandated by the law. It passed 225-192 largely along party lines despite fierce opposition from disability rights advocates, who staged protests in the House chamber during the vote. Capitol Police escorted protesters out of the visitors’ gallery, many of whom were in wheelchairs and chanted “hands off ADA!”

Today’s vote was a defeat for civil rights. This attempt to undermine the Americans with Disabilities Act is a damaging, unnecessary, and ill-conceived effort that should have been rejected by members of the House and should be dead on arrival in the Senate. The disability community should not have to fight through bureaucratic red tape to enjoy basic liberties that others freely enjoy. This legislation further marginalizes one of the most excluded communities in society. The ACLU will continue to fight alongside people with disabilities and allies to vindicate rights protected under the ADA, and we will ensure our 2 million members know where their representatives stand on the rights of people with disabilities.

House Republicans have narrowly passed a bill to limit lawsuits over the ADA. 225-192 with blind ppl and folks in wheelchairs lining the House gallery — many loud protests.

🚨 #BREAKING 🚨 @HouseGOP pass #HR620 which undermines the civil rights of Americans with #disabilities. It weakens the #ADA by creating significant hurdles for a victim of discrimination to pursue an ADA claim regarding access to public accommodations in court. #HandsOffMyADA pic.twitter.com/zlY6Mwboml

BREAKING: The House just passed #HR620, the ADA Education and Reform Act, which limits the power of the Americans with Disabilities Act and turns back the clock on disability rights in America. This is deeply shameful. pic.twitter.com/gJnsPI0pin

People in House gallery above the floor are protesting as members are about to vote on ADA lawsuits bill chanting “Hands off ADA, don’t take our rights away.”

If you don’t live with a disability, you might not think of #ADA violations as significant at 1st glance, but I assure you they’re significant for those of us who do live with disabilities