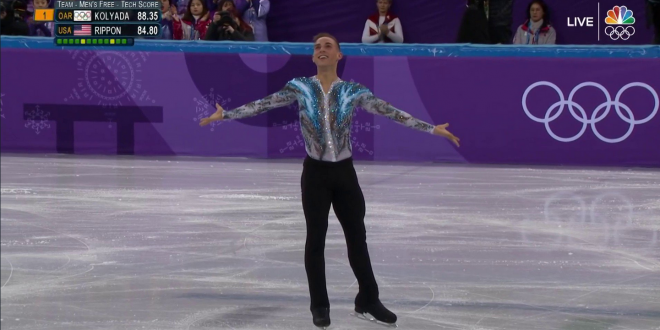 U.S. figure skaters won the bronze medal in the team event on Monday, in an action-packed tournament that saw Mirai Nagasu land a historic jump – and in which Adam Rippon and other Americans showed they’re in fine form at the Pyeongchang Winter Olympics. The final results on Monday mirrored the tally from the qualifying rounds one day before: Canada took gold, followed by the Russians and the U.S. team.

Nagasu became the first U.S. woman to land a triple axel in Olympic competition, in a powerful performance that brought a score of 137.53 points — a new personal best, according to the U.S. Figure Skating Association. Rippon dazzled the crowd at the Gangneung Ice Arena; after his skate was over, he clapped his hands to his face as if to take in a special moment. It was the only hint that he had felt the intense pressure to deliver for his team and his country on an Olympic stage.

All I’m going to say is I’m grateful for Adam Rippon and for every LGBTQ person who brings so much beauty to this world. pic.twitter.com/wVGD4XIOaD

So proud that @Adaripp and I get to wear these medals and show the world what we can do! #represent🏳️‍🌈 #olympics #pyeongchang2018 #pride #outandproud #medalists #TeamNorthAmerica pic.twitter.com/eXMlZ2Utrw