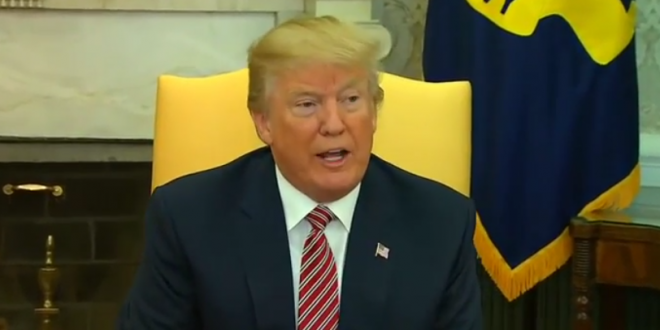 President Trump, who had gathered the press in the Oval Office Friday afternoon to share that he had donated money to a family with a father battling cancer, commented on now-former White House aide Rob Porter, who resigned over allegations of spousal abuse. The president said the White House wishes him well, noting that it is a “tough time” for the former staff secretary.

“We wish him well,” the president said. “He worked very hard. I found out about it recently and I was surprised by it. But we certainly wish him well. It’s obviously a tough time for him. He did a very good job when he was in the White House. And we hope he has a wonderful career, and hopefully he will have a great career ahead of him.

“But it was very said when we heard about it, and certainly he’s also very sad. Now he also as you probably know, he says he’s innocent. And I think you have to remember that. He said very strongly yesterday that he’s innocent. So you’ll have to talk to him about that. But we absolutely wish him well. Did a very good job while he was at the White House.”

He's blaming Hope Hicks … "The president feels that Hope Hicks has allowed her romantic relationship with Porter to really cloud her judgment and her decision-making … that Hope Hicks put her own priorities above his and above the White House's." pic.twitter.com/ahPjkyxszI