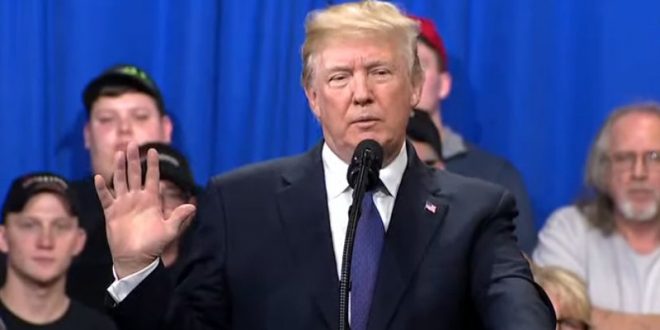 Trump: Not Applauding For Me Is “Treasonous” [VIDEO]

During a speech touting the Republican-led Tax Cuts and Jobs Act in Blue Ash, Ohio, President Trump railed against Democrats for being dead silent during his State of the Union address.

Even when he was sharing positive, bipartisan news on the economy, Trump looked over at the Democrats and saw few smiles. It was “very selfish” for the Democrats for wanting him to fail than having the country succeed, the president said.

It got to the point where Trump stopped even looking at the Democratic side. “It was bad energy,” he recalled. Even on positive news, “they were like death and un-American.” “Can we call that treason?” he asked. “Why not.”

Pres. Trump says Democrats not applauding at the State of the Union were "un-American…can we call that treason? Why not." https://t.co/NkJuIoh4fP pic.twitter.com/Pav4yoUwGB

Trump accuses Democrats of being "treasonous" for not applauding him during State of the Union.

For the 28th time in office, Trump lies that the US was one of the world's highest-taxed countries before his tax cuts.

Trump accuses Democrats who didn't applaud for him at #SOTU of treason.

"Can we call that treason? Why not? I mean, they certainly didn't seem to love our country very much. But you look at that. It's really very very sad." pic.twitter.com/er3AbvCCwR

Nothing says "I'm not a dictator" like saying that people who don't applaud for Trump are committing treason.