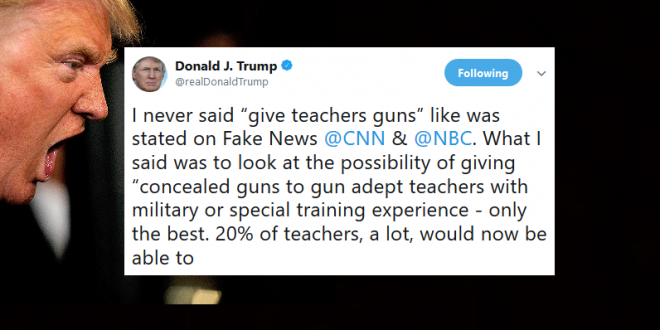 Trump Logic 101: I Never Said Give Teachers Guns, I Said Give Concealed Guns To Gun-Trained Teachers

President Donald Trump lashed out at media coverage of his proposal to arm some teachers by denying that he ever made it. “I never said “give teachers guns” like was stated on Fake News CNN and NBC,” the president wrote on Twitter. However, Trump then seemed to undercut his own point by saying that some teachers should actually be armed. The president also said that armed teachers would “serve as a deterrent to the cowards that do this” — and he said that arming teachers would be a much cheaper option than paying for armed guards.

I never said “give teachers guns” like was stated on Fake News @CNN & @NBC. What I said was to look at the possibility of giving “concealed guns to gun adept teachers with military or special training experience – only the best. 20% of teachers, a lot, would now be able to

….immediately fire back if a savage sicko came to a school with bad intentions. Highly trained teachers would also serve as a deterrent to the cowards that do this. Far more assets at much less cost than guards. A “gun free” school is a magnet for bad people. ATTACKS WOULD END!