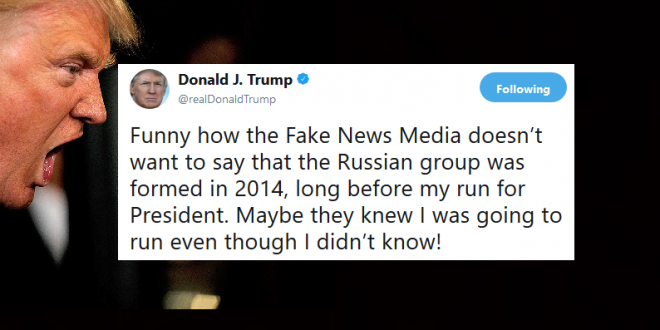 Trump, as always, is lying.

Just one example from the New York Times:

In 2014, Russians working for a shadowy firm called the Internet Research Agency started gathering American followers in online groups focused on issues like religion and immigration. Around mid-2015, the Russians began buying digital ads to spread their messages. A year later, they tapped their followers to help organize political rallies across the United States. Their digital instrument of choice for all of these actions? Facebook and its photo-sharing site Instagram.

The social network, more than any other technology tool, was singled out on Friday by the Justice Department when prosecutors charged 13 Russians and three companies for executing a scheme to subvert the 2016 election and support Donald J. Trump’s presidential campaign. In a 37-page indictment, officials detailed how the Russians repeatedly turned to Facebook and Instagram, often using stolen identities to pose as Americans, to sow discord among the electorate by creating Facebook groups, distributing divisive ads and posting inflammatory images.

Funny how the Fake News Media doesn’t want to say that the Russian group was formed in 2014, long before my run for President. Maybe they knew I was going to run even though I didn’t know!

“Charges Deal Don A Big Win,” written by Michael Goodwin of the @nypost, succinctly states that “the Russians had no impact on the election results.” There was no Collusion with the Trump Campaign. “She lost the old-fashioned way, by being a terrible candidate. Case closed.”

The White House pointedly noted the alleged Russian interference began in 2014, a year before Trump announced his candidacy. Aside from the fact that the initial alleged purpose was just to sow discord: Trump was talking about a run as early as Jan. 2014. https://t.co/OirFCYSYvG pic.twitter.com/4GpspH0nmx

Mr. Trump, you told the Russians you’d be running for president in Moscow in November 2013—and indeed it was that declaration that led to the anti-U.S. campaign in early 2014. Cohen had made clear by mid-2013 you were running; you confirmed it to the Agalarovs and Yulya Alferova. https://t.co/UyjT9QMqbE

I’m sure you were just registering https://t.co/t4C3ZalSyF for one of your golf courses. pic.twitter.com/cBqSJDGEEt