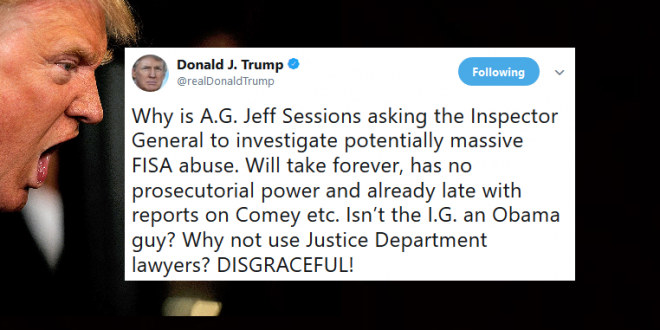 President Donald Trump has mounted a fresh attack on his attorney general, questioning his judgement on a federal investigation in a rambling tweet. The president lashed out at Attorney General Jeff Sessions over his decision to appoint the Department of Justice inspector general to probe allegations of FBI surveillance abuse.

Mr Sessions had announced the day before that the inspector general would investigate claims that the FBI inappropriately surveilled the Trump campaign during the 2016 election, using improperly obtained Foreign Intelligence Surveillance Act (FISA) warrants.

“We believe the Department of Justice must adhere to the high standards in the FISA court,” Mr Sessions said at a news conference on Tuesday. “Yes it will be investigated. And I think that’s just the appropriate thing the inspector general will take that as one of the matters he’ll deal with.”

Why is A.G. Jeff Sessions asking the Inspector General to investigate potentially massive FISA abuse. Will take forever, has no prosecutorial power and already late with reports on Comey etc. Isn’t the I.G. an Obama guy? Why not use Justice Department lawyers? DISGRACEFUL!

BREAKING: The President of the United States just called his own Attorney General, Jeff Sessions, “disgraceful” for not using DOJ attorneys to go after the FISA courts.

I’ve already said it once. Trump is looking to fire Sessions and appoint a new AG in recess on March 24th.

Trump is not happy Sessions has the IG looking into FISA abuse claims. There is absolutely no way, however, that I believe this rather complex thought process actually came from Trump. Either Fox News or someone did a thing on this, or someone else prepared this tweet. —> https://t.co/ipC8xfJFMW

Jeff Sessions is the dog Trump kicks when he’s frustrated about how things are going at work.

Even though attacking Jeff Sessions is very much in line with Trump, the rest of this tweet is not — too intricate for Trump to know about. Someone else in WH put him up to it I suspect. https://t.co/51MWeGldjr

Trump is scared simply to fire Sessions, but desperately wants Sessions to quit so Trump can put someone else in there who could shut down or curb Mueller. I hope Sessions resists the temptation to resign. He should make Trump fire him if Trump has the nerve. https://t.co/Qf3iR6G5kL