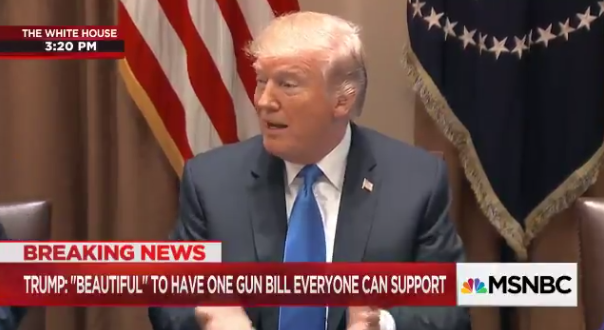 President Trump said he favored taking guns away from people who might commit violence before going through legal due process Wednesday, one of many startling comments he made in a rambling White House meeting with a bipartisan group of lawmakers.

Trump also called some of his fellow Republicans afraid of the NRA, said “we must harden our schools against attack,” and called for other steps to end the “senseless violence” that has claimed lives in classrooms, night clubs and work places across the country.

“We can’t wait and play games and nothing gets done,” Trump said two weeks after a mass shooting that claimed 17 lives at a high school in Parkland, Fla. “I like taking guns away early,” Trump said. “Take the guns first, go through due process second.”

President Trump proposes taking guns away from owners before going to court.

“By the time you go to court, it takes so long to go to court to get the due process procedures, I like taking the guns early.” pic.twitter.com/ZtNNwyzTzA

If Obama had called for literally grabbing guns, Fox News would have exploded into millions of enraged teabagger molecules.

But since Trump just said it…..nothing.

Trump is openly advocating taking peoples’ guns without due process, in case you wanted to tell your paranoid relatives and friends they’ve been afraid of the wrong people.

Feinstein: What do we do with weapons of war?

Trump: You can’t buy those in stores, those are black market guns

Feinstein: You can buy AR-15’s in stores

Trump this week has been talking up extra-judicial killings of drug dealers, and just publicly endorsed seizing guns “first, go through due process second”

The NRA would’ve issued a drone strike on the White House had Obama said that. pic.twitter.com/xsom68Xig0

Previous Students Are Giving The Liberal Redneck Hope On Guns
Next BREAKING: Hope Hicks To Resign From White House